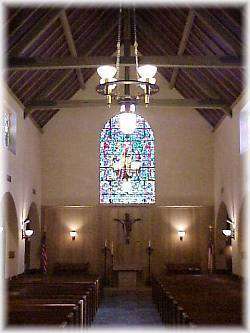 Grace Episcopal Church began in 1898 in another location in town.. The sanctuary was designed by John Duncan Forsyth and was commissioned on Whit Sunday 1951 in our current location of 13th and Grand. Forsyth was also the architect of the Marland Mansion and many other structures in the region. Oil baron and Governor of Oklahoma, E.W. Marland was a parishoner. In 1998 Grace church celebrated its 100 year with the commisioning of the new Christian Education building.

Qne of the stained glass windows which were created in England, shows the Whitehurst memorial window which depicts Christ with the children.

Things to do Historic Churches near Ponca City, OK