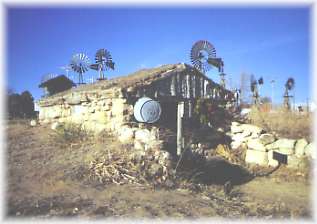 In keeping with the narrow focus of the Shattuck Windmill Museum and Park, a half-dugout has been reconstructed at the park to show how many of the early settlers lived. It is furnished with a small iron stove, table and quilt covered bed. See how a dry, packed earthen floor actually becomes "flooring" that is sweepable and which could be covered by area rag rugs.

In August 1904, Alexander and Eva Ehrlich filed a claim on a piece of land seven miles southwest of Shattuck. From the caliche rock found on their own land they hewed and shaped the stones for the family dugout. The original dugout was larger than this reconstruction as many of the original stones could not be moved due to the lay of the land. The Ehrlichs and their nine children lived in this half-dugout until they could build a two-room, two story frame house. At that time the dugout became a cattle shed. Alexander later moved to Shattuck to run a feed store that boarded horses.