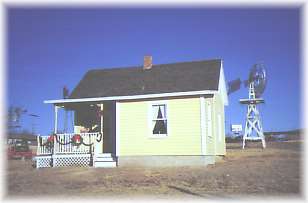 It must seem strange to the ghosts of the little homestead house to suddenly have it settled almost in town: After all, it has only moved once in all of 100 years and then only to be installed on top of a little basement.

This story-and-a-half house was built about 1900, and later purchased by David G. Steinert and his wife, Hannah Ehrlich Steinert, in whose family it has remained to the present. There they raised their four children until about 1927, when they moved into a new house which they had built close by. The homestead house consisted of a lean-to kitchen, living-dining room and the parent's bedroom. Up the very narrow stairway was the large open attic where the four children slept, sometimes waking up to snow sifting down upon their heavy quilts. Curtains strung on wire gave a little privacy to Bertha who had to put up with 3 brothers. A very large closed wooden box was built in the attic to store 50 lb. sacks of flour to tide them over during the winter months.

How charming it all seems now, but how difficult it must have been in 1910.