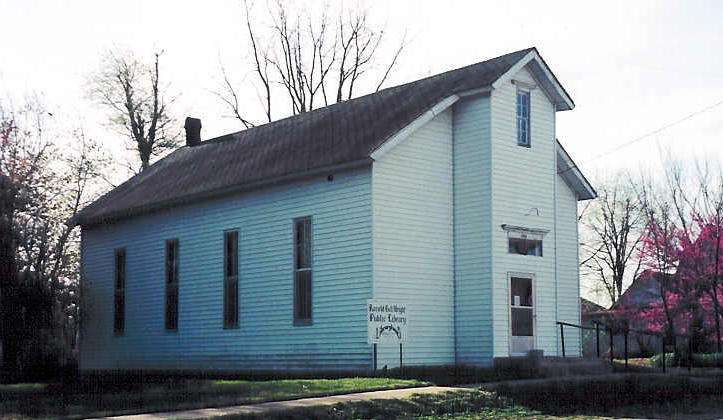 When the First Christian Church (aka Pierce City Christian Church) in Pierce City closed, its board decided to give the building to the community for a library. The building served as Pierce City's public library from 1933-2000. The library has subsequently moved to new quarters. The building, the first church Harold Bell Wright pastored, is now the Harold Bell Wright Museum. The "new" library was demolished due to tornado-related damage from May 4, 2003. Another Pierce City Library was built on Main Street and opened in February 2005.

In 1881, Pierce City had room for not only two new Methodist Churches, but for a new Christian Church as well. The Campbellites built a nice frame church in the 400 block of Walnut, and immediately gained a large membership, which faithfully served its people and the community. This Church was notable for its singers, and often had programs for the public. It had several fine ministers, but notable to all was the outstanding young minister, Harold Bell Wright, who came in 1897. He wrote his first novel, "That Printer of Udells," while pastor at Pittsburg, Kansas. He was required for health reasons to move to Arizona, where he continued writing until his death.

The Museum contains the organ and several pews used by the congregation. The organ and a chandelier hanging in the museum date back to 1896, when Wright rode a horse some 25 miles every Sunday from Mt. Vernon, MO to preach here. Artifacts from that time include a big church key which was for the lock on the original door. The museum is open Saturdays from 1-4 p.m. and displays Harold Bell Wright books and memorabilia including movie posters, postcards, etc. as well as items from Pierce City, Missouri history.

A collection of world travel books from a local artist, Grace Tinker, are also found at the museum, as well as, most of Harold Wright's books. A huge scrapbook containing a treasure of Pierce City history is the collection of Theron Bennett, former resident and nationally known ragtime composer is currently safely locked away.

Things to do Museums near Pierce City, MO