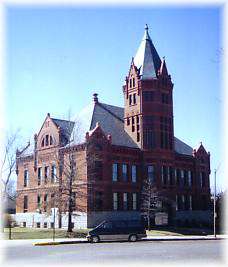 One of Marysville's great old landmarks is the Historic Marshall County Courthouse. Built in 1891, the brick-faced Romanesque gem has columns of polished red granite. "Justice" stands out in terra-cotta in cornices above the second-floor windows. It is listed on the National Register of Historic Places. As historic as this structure may appear by it's architectural design, it was not the first magnificient courthouse to stand on this corner. Seventeen years earlier in 1874, citizens were proud of their stately two story courthouse building; however, on New Year's Eve of 1890 a mysterious fire destroyed the courthouse and most of the records.

When you visit the historic courthouse, you will notice that the building was well built to withstand time and the disaster of another fire. The roof is slate and galvanized iron; the tower is capped with copper. Bricks are found throughout the building on the outside and in the ceilings. Wainscoting in the main corridors and stairs is enameled brick; the lobby and corridors are tiled. Treads on the iron stairway are slate with copper posts and sides.

The wood that is in the building is beautiful, and much of it is carved decor. The courtroom is just as it was left in 1979 when it ceased to be used as a courtroom. There are stain glass windows and vault rooms with decorated iron doors. The tower was built for appearance.

The building was the Marshall County Courthouse for 87 years before a new structure was built immediately west in 1979. The Marshall Co. Historical Society now owns and operates the Historic Courthouse, which includes the Historic Library, a display of historic photos and antique newspaper equipment, the Dr. J.W. Randell room and business and professional offices.

Special interest rooms include a school room, medical rooms, a dental room, the CCC Camp room, an old-time wash room, a WWI and WWII room, a chapel room, and a ghost town room. The ghost town room is made of Marshall County towns that are either gone or nearly gone, but not forgotten.

The other rooms represent the surrounding towns, such as the VICTORIAN room from Waterville, furniture from OKETO, Agriculture from the German settlement of BREMEN, HERKIMER, a primitive kitchen from VERMILLION, and other rooms are waiting to be completed.

The building has twenty-five rooms, two restrooms, six vault rooms, and a tower.

The genealogical library has census, marriage, and naturalization records, county newspapers, histories of county towns and churches, and an index of burials. There is a minimum $5.00 charge for genealogical research.