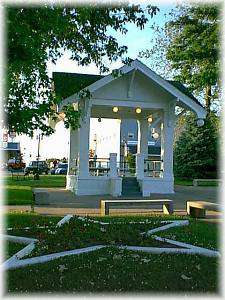 Dedicated in 1915 by Vice President Thomas Marshall and rededicated after restoration in 1987 by George Bush, the square and bandstand, listed on the National Register of Historic Places, remain the hub of the downtown business district and host to concerts, festivals, and other activities.

When the railroad came to Mountain Grove in 1882, Joseph Fisher bought land
for a depot and platted a town. Also in 1882 Dr. Isaac Lane bought the land
north of Fisher's and laid out streets and a square. He also gave plots of land
to some businesses willing to locate around the new square. It was Lane who
understood that a space must be provided for the rural people who came to town
to trade. At first, an area of brush and trees on the north part of Fisher's
land blocked the square from the depot. One night a "nipping frost"
cleared all this growth and formed a visual link between depot and square which
was maintained for many years.

In 1885 Professor Baker, a local teacher, started a brass band, the first in
town. The paper reported Baker's band was "able to discourse excellent
music greatly to the credit of all concerned."

The current bungalow-style bandstand is the second in the Mountain Grove square.
The earlier bandstand was a Victorian stick-style affair of two stories. It
was built during the 1880s, possibly in time for Baker's brass band to perform
there.

On Aug. 3, 1915, Thomas R. Marshall, then vice president of the United States,
dedicated the new bandstand to "the average man." That evening Marshall
urged his hearers "to maintain neutrality," but before long the town,
and the rest of the country, would be involved in World War I.

During both world wars the square was used for bond rallies and Red Cross auctions.
Stella Brooks remembered that during the first world war, "They used to
let all the girls out of school so we could go get apples from the fruit station
to give the soldiers when they came through on the troop trains." In 1917
the local paper reported that 13 Pullman cars of soldiers stopped en route from
Iowa to Texas. "They marched to the square and were treated to cigars and
apples," according to the paper. "The men expressed their appreciation
and said we had treated them better than any stop on the trip." When news
of the Armistice came on the railroad's telegraph, a bonfire was started on
the square, and people threw their hats in to fuel the flames.

Mountain Grove's principal entertainment was musical. Saturday evening band
performances took place in the Square during the summer months. The expenses
were meet by the city and the Chamber of Commerce. Businesses stayed open late
on concert nights. In the '30s and '40s. people would come early so that they
could park facing the square and listen while seated in their cars. They applauded
by honking their horns.

The square was always the center of community activities. For many years it
was the location of the Tri-County fair. During World War II the paper reported
a crowd of some 6,000 in attendance at a rally on the square at a time when
the population of Mountain Grove was about 2,700. And, of course, local politicians
often held forth from the bandstand.

The inhabitants of the Mountain Grove area depended on the square as a focus
for business and entertainment and as a place to keep up their acquaintances.
Together with the railroad and depot, the bandstand and square provided a place
for expressions of community and symbolized the community's connection with
the wider world.

A bronze Civil War soldier stands facing south in the square. Its orientation caused great controversy among the veterans of the Grand Army of the Republic when it was first erected.

A marble soldier commemorates the dead of World War I. The statue was carved

SMSU-Mountain Grove is a 190-acre campus; home to the Missouri State Fruit Experiment Station, the Midwest Viticulture and Enology Center, and the Department of Fruit Science. Established in Mountain Grove around the turn of the century,

History lives on through the Old Mill Tour, where you can tour some of the nation's finest surviving pioneer water mills. To early settlers, water was the primary source of power in the form of mills to grind grain, saw lumber

The nearby North Fork, Bryant, Eleven Point, Current, Gasconade and Jacks Fork Rivers offer the choice of floating lazily down their course or meeting the challenge of faster water. These same rivers also provide unique access to some

To Mountain Grove calendar of events

Things to do Historic Downtowns near Mountain Grove, MO