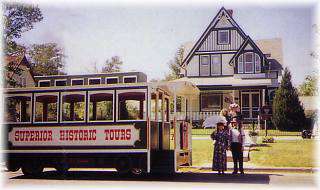 Rarely is a town the size of Superior, Nebraska filled with so many elegantly restored historical homes. It is no wonder it was given the name "Victorian Capital of Nebraska." Only a few of over 26 featured homes are exemplified below. Several of Superior Victorian homes are open for touring during the Victorian Festival Honoring Lady Vestey. Owners welcome visitors to interiors restored to their Victorian elegance. 412 E. Seventh - The Kendall House, now owned by Wilfred and Helen Miller, is on the National Register of Historic Places. Built in 1898, the house is generally one of several open for tours during the Victorian Festival HonoringLady Vestey. The home is a Queen Anne Shingle house built by a druggist, Wallace W. Kendall. The three-story house includes a 30 x 40 foot ballroom on the top floor with a stage at one end. The house was prefabricated and shipped to Superior in a railroad boxcar. The Millers have carefully restored the house, in which much of the original wood work, beams and wallpaper are intact.

Located on the property adjacent to the house is Willie's Chapel, constructed in miniature and filled with authentic items from razed churches around the area. The "World's Littlest Church" is officially dedicated as "The Historical Chapel of St. Michael, the Archangel." 653 N. Kansas - The Guthrie House - The gray and maroon Victorian house was built in 1881 by Robert Guthrie, the older brother in the Guthrie Brothers Flour Mill. Robert and his brother, David, arrived in 1879. They built a low dam on the Republican River, dug a mill race forty feet wide, ten feet deep and one and one-half miles long to power their flour mill, all at a cost of $20,000. Grindstones were soon replaced by modern roller mills and electric generators were added. This house sold in 1906 to J.S. Montgomery, a retired farmer, and many people still know this as the Montgomery place. It still has much of the original oak floors, stained glass windows, and unique turret. 340 E. Seventh - The Beal House - The large Victorian-style house is now known as the "Hunter House," having been in the Hunter family since 1949. The house was built in 1881 by Uriah Beal, whose family occupied the place until 1920, when it was sold to Joseph A. Weir. It returned to the Beal family in 1930 and they installed Superior's first underground sprinkler system in the lawn. The present owners, Lewis and Pamela Hunter, were married on its front porch and are planning to retire in Superior soon. He is a Hollywood writer and they divide their time between Burbank, California, and Superior. The home still has its original woodwork, two stairways to the second floor, fireplaces and a grand piano in the octagon corner of the living room. 514 E. Seventh - Adams House - There is no more prominent and widely-known Superior family than Captain Clair Adams and Abbie, who built this house in 1886 and named it "The Cedars" for twin rows of trees lining the front walk. He was a colonel during the Civil War. She was president of the National Women's Relief Corps and founded Superior's Daughters of the American Revolution. Captain Adams was a member of the Nebraska State Legislature and a candidate for Congress of the United States. The towns of Mr. Clair and Cadams in Nuckolls County were named for him. It is hard to believe that this magnificent home was in a state of disrepair several years ago. 537 N. Kansas - The Simonton House - This large Victorian-style house was built in 1883 by Robert Simonton, an attorney. There were several owners until 1889, when the house was sold to Frederick and Wilhelmina Lionberger, a commercial traveler who had established a boot and shoe store in downtown Superior. The Lionberger's son Earle, a graduate Chemical engineer, returned to Superior upon the death of his father in 1917. He took over the store, moved into the house and it stayed in the family until 1977, a period of 78 years. The sun room, leaded glass windows and rounded corners make it a beautiful home.

Things to do Tours near Superior, NE