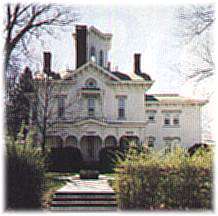 Discover Chanute's rich historical heritage. Explore tree-lined streets made of hand-laid brick and note the architectural and cultural significance of many of Chanute's historic downtown buildings and elegant homes. A printed brochure of 24 sites dating mostly from 1890 to 1907 with descriptions and map is available at the Visitors Center. 1-800-735-5229. Below are a few samples:


1. 111 North Lincoln THE SANTA FE DEPOT
The depot is on the State Register of Historical Places. Built in 1903, this was the Santa Fe Railroad's fifth passenger depot in Chanute. It was the hub of the community when it was built. It featured a Harvey-House lunch counter, a Wells Fargo Express office and 10 passenger trains daily. In 1917, the depot was doubled in size, adding a large dining room to the Harvey House restaurant, to accommodate the increasing reidership of the trains. After soliciting nearly $2,000,000 in private donations in 1991, it was historically restored and today houses the Martin and Osa Johnson Safari Museum on the south end and the Chanute Public Library on the north end.

2. 0 East Elm Street - THE FLAT-IRON BUILDING
This structure was built in 1907-08 by J.L. Barnes, the Santa Fe Superintendent and famed as the Chicago and Alton railway conductor of the First Pullman in the United States. It was built on the railroad's right-of-way to house a drug store on the first floor and offices on the second floor. For 35 years it was occupied by the Traveler's Inn Saloon. Local historians speculate that the reason the building acquired the name "Flat-Iron" was that when looking down on the building, it does have the shape of an old-time flat-iron. Purchased by the City of Chanute in 1991, it was remodeled and restored. It now houses the Office of Tourism on the first floor and Main Street Chanute on the second floor. Brochures on the building's history are available. 1-800-735-5229.

3. 1000 South Highland - THE M. BAILEY HOME
Built in 1880 by doctor turned banker, M. Bailey, this home is known locally as the "Grey Mansion." It is of Italianate design, and is a two-story painted brick structure with a cupola. There are six patterned brick chimneys at various locations. This was the first brick residence in Neosho County. The four stall garage, the west addition, and the many rear appointments were made at later dates.

5. 719 South Highland - J.J. HURT HOME
The Queen Anne-Gothic Revival home was built in 1894. The weatherboarded structure features some of Chanute's best Eastlake decorative spindlework. The doctor currently residing in the home is doing the interior restoration himself in his spare time. There is a lower hipped jerkinhead gable at the rear.

Come visit us in Chanute, Kansas

Things to do Tours near Chanute, KS