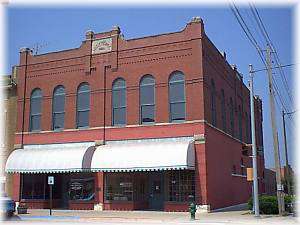 The building housed the International Order of Odd Fellows Lodge 54 and was built in 1894-1895 by Sarah Moulton, wife of a county judge. The building was Romanesque Revival style.

It was leased out as an implement company and to Mathis Shoe Repair. A printery was also in the building.

The upstairs was also used for a railroad organization.