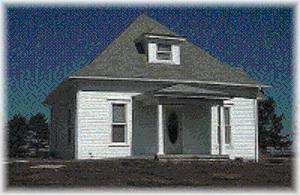 The Curry home was built in 1900. John Steuart Curry was then three years old. He lived in the home until he was eighteen. In 1987, the home was offered to the Jefferson County Historical Society. in lieu of being destroyed. The Society purchased a strip of land adjoining Old Jefferson Town, and the house was moved there in 1990. The house has been under renovation for several years and was officially opened May 3, 1997.


During the 1970's, Nelle Curry Manville collected memorabilia of John Steuart Curry, and in 1977, the John Steuart Curry Memorial Gallery was dedicated displaying this collection. Susan Krebs, president of the Art Guild, published "The Plainsman" and copied the many newspaper items, magazine articles and letters which had been gathered, preserving them in large notebooks. Family members, sisters and brothers, have donated many pictures and objects. Kathleen Curry, his wife, has donated personal items and a bust. The entire collection has been moved into the new Curry home museum.


One room is entirely devoted to the family. Another room contains major paintings, lithographs and letter art. One room has examples of his commercial art. There are displays of his personal objects and photographs of murals. The final room can be used to research news clippings, articles and books about Curry. There are also some special works hung there.


The restoration effort is a tribute to those who have donated money, possessions, time, talent and expertise. Many people and organizations have contributed to allow this project to be completed, although there is still money needed for further work. We give thanks to all volunteers as well as merchants and clubs that have helped. They have done everything needed to get the John Steuart Curry Boyhood Home Museum and Living Memorial opened.

Things to do Famous Homes near Oskaloosa, KS