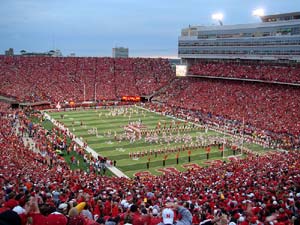 The City of Lincoln is the capital and the second most populous city of the of Nebraska. Lincoln is also the county seat of Lancaster County and the home of the University of Nebraska. Lincoln, Nebraska has earned a reputation as one of the Midwest's most beloved cities. Home to fine culinary and artistic treasures; a budding live music scene; breathtaking parks, golf courses and trails; and a friendly Midwestern attitude, Lincoln offers the exhilaration of a big city and the serenity of the countryside all in one place. The city was recently named the healthiest city in the United States as of 2008.

Lincoln started out as the village of Lancaster, which was founded in 1856, and became the county seat of the newly created Lancaster County in 1859. The capital of Nebraska Territory had been Omaha since the creation of the territory in 1854; however, most of the territory's population lived south of the Platte River. After much of the territory south of the Platte considered annexation to Kansas, the legislature voted to move the capital south of the river and as far west as possible. The village of Lancaster was chosen, in part due to the salt flats and marshes. However, Omaha interests attempted to derail the move by having Lancaster renamed after the recently assassinated President Abraham Lincoln. At the time, many of the people south of the river had been sympathetic towards the Confederate cause and it was assumed that the legislature would not pass the measure if the future capital was named after Lincoln. The ploy did not work, as Lancaster was renamed Lincoln and became the state capital upon Nebraska's admission to the Union on March 1, 1867.

Things to do near Lincoln, NE