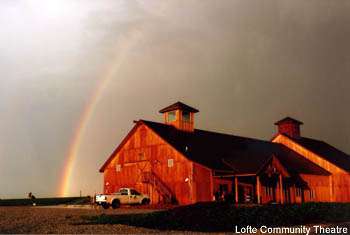 The Lofte Community Theatre is excellence in family entertainment and professional in quality performances. The uniqueness of it's building and rural location make this theatre a fun experience that keeps comedy and musical buffs coming back season after season. After 29 years of growth and popularity, the Lofte Community Theatre has moved from its old-fashioned, but professionally renovated, 1924 hog barn to a newer, bigger, and more beautifully renovated old barn in nearby Manley, Nebraska. The Lofte runs 44 performances and plays to 11,000 audience members!

The Lofte Community Theatre and the Born-in-a-Barn Players are dedicated to providing opportunities for area residents of all ages and those in surrounding communities to participate in the creation process and companionship of live theatre in rural Nebraska. Plays such as "Hello Dolly," "On Golden Pond," and "South Pacific" have entertained families throughout southeastern Nebraska. Each feature runs multiple shows per season to accommodate the growing fans of the Lofte.

Always a trademark of every Lofte production, concessions are plentiful and yummy. You can purchase your concessions items before the show and during intermission. All concessions items are allowed in the house of the theatre, so you will be able to take them into the performance with you. The seats now have cupholders for added convenience. Some of the menu items include Subway sandwiches, hot dogs, polish sausages, popcorn, candies, coffee, tea, and assorted soft drinks.

Things to do Theatres near Weeping Water, NE