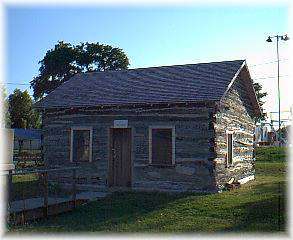 Superior's original building, a log cabin, was built by William Louden and several of his friends in 1872. The building served as a home, post office and trading post. As acting postmaster, Louden (paid $1 per month for his efforts) established "daily service," nearly unheard of in those days. It was built near the Republican River near what is now the southwest edge of the city limits.

In the 1950s, the cabin was moved to Lincoln Park. Recently it was moved to the Nuckolls County Historical Society complex. The building houses post office equipment from several of the county post offices which have been closed, and depicts the early pioneer lifestyle of carrying on many tasks under one roof. We invite you to come and enjoy this 1872 building, which aslo houses a large antique weaving loom that works - come try it!