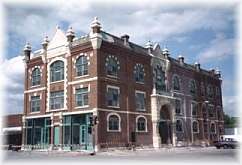 Built in 1888, the McPherson Opera House was considered one of the most elaborate and architecturally sound in the state. This three-story architectural showpiece, listed on the National Register of Historic Places had a seating capacity of 900 and was, and remains, accoustically perfect. The stately exterior had molded brick trim, varied limestone arches and cornice treatments, and an impressive South entrance flanked by granite columns and enhanced with colored glass. The building is Eclectic/Victorian style with many kinds of decorative brick. The building was lighted by electricity, a technological advancement for its time. The seating areas included the dress circle, parquet, the gallery and two box seats and the original stage curtains, chairs, and carpeting were predominately red.

During its prime, the Opera House hosted more big names and noteworthy events than the city has witnessed before or since. Not only opera companies but all sorts of professional musical and dramatic groups arrived by one of the four railroads which served the city. Local residents could enjoy presentations of "The Mikado", "Tea for Three", "Lassies White", "Mutt and Jeff's Dream", "The Marriage Question", Ibsen's "Ghosts", as well as shows by Harvey's Greater Minstrels who arrived in their own steel Pullman car. Politicians, too, frequented the city. Some of those who appeared from time to time were Judge Samuel Greene of Boston, Senator Arthur Capper, Attorney General Hopkins, Senators Charles Curtis and Chester I. Long, Supreme Court Justice Frank Doster, Secretary of Agriculture Henry C. Wallace, and presidential candidate William Jennings Bryan.

The Opera House is currently under restoration and preservation.

Come visit us in McPherson, Kansas

Learn about American history and railroading history by viewing one of Kansas largest model railroad layouts. Two train layouts featuring N&HO scales; "A slice of American history preserved in miniature." In this 1,694 square feet area there is over 1,250 feet of HO&N scale track and over 1,700

Things to do Opera Houses near McPherson, KS