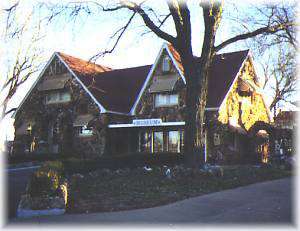 The museum is a monument to the Midgley family, one of Oklahoma's earliest landholders and most prosperous farmers. From the very first rock collected for the house until their deaths, the Midgley's had a dream to making their home a museum.

The Midgley family came to the United States from England in the 1870s. Dan met his wife, Libbie, in Kansas in the 1890s and ventured to Oklahoma to stake their claim.

The Midgleys farmed large quantities of wheat and hay in Northwestern Oklahoma. They traveled extensively each year to sell their harvests and began collecting exotic rocks on their expeditions. The rocks were obtained from various areas of the United States, but were brought primarily from Oklahoma and the Texas shoreline. The collection includes over thirty types of exotic rocks, fossil stones, crystal, agate, sandstone, and petrified wood.

After World War II, the Midgelys commissioned a crew of Texas stone masons to construct the house from the rocks they had excavated, and as one of Dan and Libbie's last requests, their home was to be a museum in their memory. The Kitchen, the Family Room, The Bedroom, the Trophy Room all contain shelves and cases filled with fruits of their daughter, Eva's, many years of arrangements. Furniture, dishes, appliances, antique toys and silver, musical instruments, a magnificent fireplace made from priceless fossil stone, and a glass encased gypsum selenite crystal - the largest ever removed from Oklahoma's Salt Plains National Wildlife Refuge - are only a small portion of the interesting collections. exploring the family history, but nothing is a breathtaking as the 7000 pound petrified tree stump located in the front lawn that was found near Woodward, Oklahoma.

There is also a gift shop. The Museum is operated by the
Northwest Oklahoma Masonic Lodges.

Come visit us in Enid, Oklahoma

Enid has plenty of facilities for community and family events.

Cherokee Strip Conference Center is one of Oklahoma'

Things to do Museums near Enid, OK