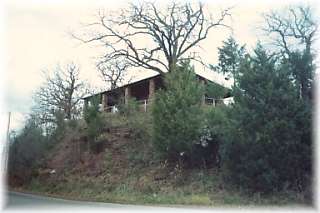 The Statistical House was built in 1907 at Chandler to house officers and scorekeepers compiling results of rifle practices and competitions during Oklahoma National Guard encampments and other training sessions. It later served half a century as housing for Business and professional Women's Club. It was constructed by Col. Roy Hoffman and CW Harry Steer of native stone and was screened. It is listed on the National Register of Historic Places. Owned by the City of Chandler, it now serves as a park pavilion offering a view of the park area and the old firing range. The 148 step pathway was constructed in 1907 and leads up the hillside to downtown Chandler at 8th and Main Street. The late Major General Roy V. Hoffman is credited by many as being the prime mover of Oklahoma National Guard development and was responsible for Chandler being selected as annual summer training camp grounds soon after statehood.

In 1931, Hoffman was promoted to major general and until the outbreak of World War II, he commanded the 45th Infantry Division, the famed "Thunderbirds" composed of guardsmen from Oklahoma and New Mexico. He was instrumental in establishing the American Legion organization in Oklahoma.

The National Guard state rifle range target wall which still exists at the west end of the original 1,000 yard practice range, although weather has worn away the inscription shown in the picture. The concrete wall was built, with embankments, in 1907 by Col. Roy Hoffman and CS Frank Steer.

Address: The Statistical House and the wall can be reached by turning west at 6th and Manvel to Deener Road.

National Register of Historic Places This two-story white clapboard home was built in 1897 by H.F. Johnson as a simple territorial "four square" home. In 1905

National Register of Historic Places Built by the WPA in 1942 of native limestone.

On the north end of the business district, look for the peaked roof of the vintage 1930's Phillips 66 station. Although no longer in use, the building reminds us of travel down the historic Route 66 which runs through downtown Chandler.

Things to do Memorials near Chandler, OK