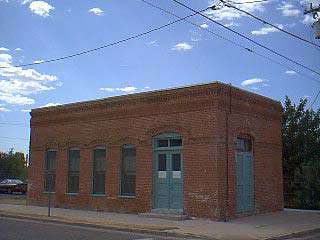 Nicholas was a French-born rancher, farmer, and saloon keeper who came to town in 1880 and opened his first Beer Hall about 1886. He then moved to this building in October 1889.

One of the few structures in the historic district to include a basement which may have been used to store liquor and keep it cool, the bar also boasted a steam-powered fan to cool patrons in the summer. The Sonoran roof was constructed of log beams spaced from about 20 to 40 inches apart, with saguaro cactus ribs laid continuously across the tops of the beams. The cactus ribs are covered with a layer of straw, followed by several layers of mud (and possibly horse manure depending on the mason) resulting in a floor to ceiling dimension between 12 and 14 feet. Therefore, unlike the Nicholas Residence, the Nicholas Building still has the mud and cactus ceiling. It also still has a wood floor.

Originally, there were three entrances, two on 11th Street and one on Bailey Street. The building has been used variously as a residential dwelling and rental, and currently as an office. Current owners are Paul and Diane Marchand and John and Laura Bolognino.

The old Town Hall and Jail was built in 1909 and is listed on the National Register of Historic Places. The brick bui...