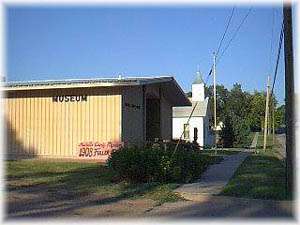 Visitors to the Nuckolls County Historical Society museum complex may browse through Dahlgren Hall, Marquart Hall, the Ag Hall, Aurand Hall, the Log Cabin, Home and Post office, and a restored railroad caboose. Adjacent to the schoolhouse are its original outbuildings, and Dahlgren Hall has horse drawn machinery, and Marquart Hall displays over 3,000 model airplanes. The Nuckolls County Historical Society is one of the nicest and cleanest museums around.

True to the rural heritage of the County, the evolution of farm equipment used by the pioneer is depicted in a nearly complete display. Other displays present housekeeping articles, clothing and toys from early days. Turn-of-the-century commercial establishments such as a beauty shop and a doctor's office are featured in room displays. Business equipment evolution is also represented. Special displays present memorabilia from each town in the county.

A variety of American Indian articles are on display in the main museum. The Sioux Indian articles have been developed into an interpretive display. Many articles have been collected from this area, including some belonging to Chief Red Cloud. In addition, there are articles from the Pueblo, Hopi, Maricopa, Tesque, Acoma and other tribes displayed, adding variety and depth to the Indian exhibit.

Museum offerings also include the priceless collection donated by the Lady Evelyn Vestey. Mementos represent her early life as well as souvenirs of her time in England and her foreign travel. There is also a collection of items that Lady Vestey sent as Christmas gifts to the school children. On special occasions for groups, we ask a local historian, who portrays Lady Vestey, for an opportunity to relive history of this special woman.