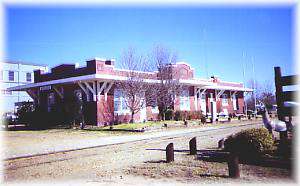 The Pushmataha County Historical Society has many records available at the depot for amateur or professional genealogists. Records are accessible for the counties of Pushmataha, Pittsburg, Latimer, McCurtain, Choctaw, Bryan, and Atoka. Family histories are also left at the depot on file with the hope of helping people discover their roots.

From then to now, including the Harvey House ...

The St. Louis and San Francisco Railroad (the "Frisco") completed its tracks connecting Paris, Texas with Fort Smith, Arkansas in 1887. A frame depot sat across the track west of the present Depot. In January 1900, the Frisco made plans for a Fred Harvey house at Antlers to feed and lodge travelers. In mid-July the Harvey House held a grand ball with music furnished by Paris musicians. Opened for business about August 12, the dining room had six large tables and the hotel had thirteen richly furnished bedrooms.

Announcement was made in May, 1906, that a new stucco Frisco depot and Harvey House combination would be built in Hugo. By February 1908, the Harvey house in Antlers was running only a lunch counter and the hotel for travelers. Some trains had dining cars but some still stopped 20 minutes in Antlers for meals. The Harvey House was abandoned in late November, 1910, but when the Antlers depot burned in July, 1911, the Frisco moved its offices into the building and plans began for a new depot.

After the devastating Antlers fire of 1904, city trustees passed an ordinance that required fireproof buildings of brick, stone or cement throughout within city limits. In March 1913, the Frisco announced that it would build a brick building east of the tracks. By early May the first stakes were in the ground marking the site. On June 5, 1914, the railroad moved into the new depot. But in April 1915, seven carloads of materials from the razed Harvey House were shipped out, bringing to an end a delightful but short-lived historic building in Antlers.

Final passenger service on the Frisco through Antlers ended February 1, 1958. The Frisco was taken over by Burlington Northern which ran freight trains until the final run the first week of February, 1981. The the track from Antlers south was used to transport pulpwood loaded onto cars in front of the old Frisco Depot until 1990 when a new facility was completed just south of Antlers.


Come visit us in Antlers, Oklahoma

Things to do Railroad History near Antlers, OK