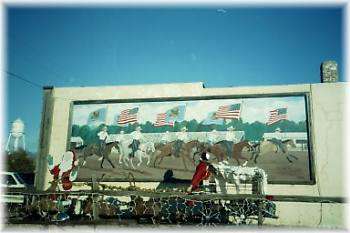 The mural was created from a mental image that inspired the cowboy artist after seeing the unique style in which "Old Glory" is presented each and every year at the opening of the Freedom Rodeo. From there, it became a painting as a gift to the Freedom Chamber of Commerce, and then a belt buckle design and program cover to commemorate the 50th Anniversary Rodeo in 1987. In 1993, the Chamber of Commerce commissioned the artist to recreate the scene in life-sized proportions, and the Freedom Mural "Posting The Colors" was unveiled during that year's rodeo celebration. It is a magnificent piece of artwork, and its creator is our very talented and good friend.

Things to do Arts near Freedom, OK