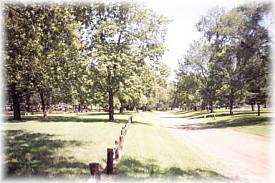 Peabody's beautiful City Park has provided a meeting place for generations of community members. The idea of a park was perhaps established in 1876 when the tradition of having a county wide 4th of July celebration in a nearby grove of trees started. Friends got together and listened to patriotic speeches and enjoyed picnic lunches.

The Peabody City Park was first owned by the Marion County Fair Association. The State Fair was held on the grounds in 1885. There was an exhibition hall built with three wings and a race track equal to none other in Kansas. The grandstand would seat 2,000 people. Dining services and food to feed 10,000 people each day were brought from Emporia by train.

Joe Young was a renowned race horse who was owned and driven by Willis Westbrook. Joe Young sired Joe Patchen who sired a great racing horse, Dan Patch. Joe Young was injured in a storm and had to be destroyed. He is buried in a standing position two miles west of Peabody on Hwy. 50.

The grounds were turned over to the City of Peabody shortly after 1900. The Chautauqua, a program bringing culture to rural America, was held here from 1907 to 1920. Wooden benches were placed under large tents. Season tickets sold for $2.00 and $1.00 in 1910.

One of the oldest buildings in Peabody is the octagonal Floral Exhibition Hall in the park. It was completed in September, 1881 and is the only remaining building used during the 1885 State Fair.

In 1999, the park can boast of many additional varieties of trees including Bradford pears, bald cypress, sweet gum and perhaps the biggest pin oak tree in Kansas.

Fireworks in the park may date back to the original settlers but recorded history says the public shows were first done by the Peabody Kiwanis Club and later by the Chamber of Commerce. Wonderful shows have taken place over the years and at some points it was estimated that up to 30,000 people attended the displays annually.

Along with the historic significance as the site of the 1885 State Fair, the park still remains a large and beautiful area for picnics and gatherings as well a city festivals. There's playground equipment, ball fields, and a municipal swimming pool adjacent to the park.

Things to do Landmarks near Peabody, KS