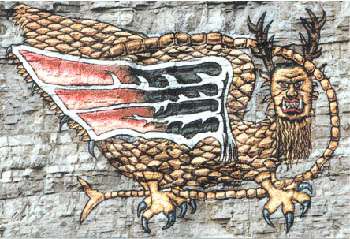 The Piasa Bird (pronounced Pie-a-saw), is a local legend in the Alton area. Its foundings go back to 1673 when Father Jacques Marquette, in recording his famous journey down the Mississippi River with Louis Joliet, described the "Piasa" as a birdlike monster painted high on the bluffs along the Mississippi River, where the city of Alton, Illinois now stands.

According to the diary, the Piasa "was as large as a calf with horns like a deer, red eyes, a beard like a tiger's, a face like a man, the body covered with green, red and black scales and a tail so long it passed around the body, over the head and between the legs."

The creature was given its name by the Illini Indians, The Piasa, or Piusa, means "the bird that devours men" or "bird of the evil spirit".

The most enduring and fascinating legend about this bird was written by John Russell in 1836. It follows:

Before the village of the Illini, the mighty river swept to the south, clear and fresh. The surrounding woods were rich with game. The bluffs and the mighty trees shielded the Illini from the harsh winds that sometimes swept in from the north. Their village was a secure and happy place. Chief of the Illini was Ouatoga (Watoga). He was old and had led his tribe in the ways of peace for most of his lifetime. Ouatoga and his people loved their home and their way of life. Then one morning, as the sun began to climb towards the summit of its cloudless sky, terror touched the Illini. The village stirred. A number of younger braves were leaving on an early morning fishing expedition. Some were already on the river in their canoes, others preparing to embark, when suddenly the very earth seemed to shudder with the sound of an alien scream.

Out of the Western sky came a gigantic flying monster. Its body was much the size and shape of a horse; long, white fangs stabbed upward from the protruding lower jaw and flames leaped from its nostrils; two white, deer-like horns angled wickedly from its head. Its huge wings pounded the air with such force the trees bent; its stubby legs held dagger-like talons and its spiked tail wound around the grotesque body three times.

Almost before the braves realized their danger, the beast, soon to be named the Piasa Bird, swooped across the beach and carried one away. From that moment on, the Illini were terrorized by this incredible and blood-thirsty monster. Each morning and afternoon thereafter, the Piasa Bird came, shattering the peace of the village with its blood-chilling screams and the thunderous beat of its wings. More often than not, it returned to its lair with a victim.

The Illini looked to their chief, Ouatoga, for a solution to this menace. Time and time again he had led them through the trials of famine, illness, and the threat of warlike tribes. But Ouatoga felt helpless before this danger and the years weighed heavily upon him. The beast seemed invulnerable. His body was covered with scales, like a coat-of-mail. The best efforts of Tera-hi-on-a-wa-ka, the arrow maker, and the tribe's finest archers were to no avail.

Then Ouatoga appealed to the Great Spirit. For nearly a full moon he prayed and fasted. Then in a dream he found the answer. The body of the Piasa Bird was not protected under the wings. After offering thanks to the Great Spirit, Ouatoga called the tribe together and devised a plan that could destroy the Piasa Bird. All that day Tera-hi-on-a-wa-ka sharpened arrowheads and painted them with poison while the tribe fasted and prayed. That night, Ouatoga and six of the finest braves crept to the top of the high bluff overlooking the Great Father of Waters. When dawn came only Ouatoga was visible, standing straight and firm in full view. The braves were hidden nearby behind a rock ledge, bows ready.

Suddenly, the scream of the Piasa Bird broke the silence and the winged monster swept into view. Immediately it sighted Ouatoga and with what seemed a shriek of delight, it pounced. As it did, Ouatoga fell to the ground and grasped the strong roots that grew there. The pain of the talons sinking into his flesh inspired him to grip the roots even more tightly. As the Piasa Bird raised its great wings in an effort to carry off its victim, the six braves stepped from their hiding place and shot six poisoned arrows into the unprotected place beneath the beast's wings. Again and again the bird raised its wings to fly. But Ouatoga held fast and each time six poisoned arrows drove into the bird's vulnerable spot. Finally, the poison did its job. With a scream of agony, the Piasa Bird released its hold on Ouatoga and plunged down the bluff to disappear forever in the swift waters of the great river.

Carefully, tenderly, the braves carried Ouatoga to his tepee where, in time, he was nursed back to health. Then a great celebration was held in the camp of the Illini. The next day, Tera-hi-on-a-wa-ka mixed paints and, carrying them to the bluff, painted a picture of the Piasa Bird in tribute to the victory of Ouatoga and the Illini. Every time an Indian passed the painting, he shot an arrow in salute to the bravery of Ouatoga and deliverance from the Piasa Bird.

Things to do Archaeology near Alton, IL