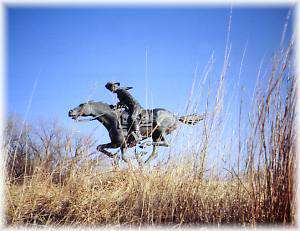 Sculpted by Dr. Richard Bergen, Salina, the exciting bronze piece seems alive, thundering across the prairie to the next station. The bronze sculpture was made possible by the R.L. and Elsa Helvering Trust and dedicated by Gov. John Carlin on July 4, 1985, and 125th anniversary celebration of the Pony Express.

Two LifeTiles Murals will be added to the Pony Express Plaza in the spring of 2009, a Pony Express Mural and a Train Mural. Produced by Boston, MA artist Rufus Seder, the murals are a rare art form. Future plans are to add a third mural incorporating Marshall Ferry and other Marysville history.

Each mural consists of 90 individual glass tiles with images embedded in each tile. When the tiles are viewed from a stationary position they appear as a fixed image. However, when the viewer moves from one side to another, the embedded image appears to depict motion as the viewer moves.

Things to do Pony Express near Marysville, KS

This memorial commemorates the Pony Express route that briefly passed through Atchson County. "On September 14, 1861, the ...