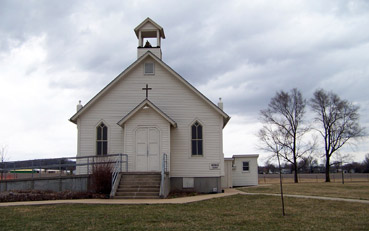 The original Reno Methodist Church was opened August 16, 1891 at a cost of $1,900. Samuel Kelsall and James Phenicie were instrumental in its organization. The first minister was John Jacobs - a Baptist and blacksmith in Reno.

The original building was destroyed by fire in 1918 and was immediately rebuilt. It holds a rich history of Sunday services, marriages, deaths, ice cream socials and watermelon feeds. It officially closed in 1993. To save it from being torn down its members sold the building to the Tonganoxie Historical Society on June 9, 1993 for $1.00 and paid for the cost of moving it to the Historical Site in the spring of 1994.

Another historical note about the Reno Church is that it was used in the filming of "Where Pigeons Go to Die", produced by- and starring - Michael Landon in 1989. Now it stands as a reminder of all the religious history of this area - including old Bibles, ministers and community churches.

Located on the Tonganoxie Historical Society Museum site, the Reno Church may be rented for weddings, funerals and church or community meetings. The fellowship hall, located in the basement, has a small kitchen, restrooms, and is handicap accessible.


Come visit us in Tonganoxie, Kansas

As one of four buildings on the Tonganoxie Historical Society site, the Honey Valley schoolhouse – district #56 - was organized on March 25, 1869. It was located about a mile south of Tonganoxie on the Gordon Harmon Farm -near County Road 1 and U. S. Highway 24-40

The Fairchild/Knox hay barn and milk parlor are now the Community building and the museum of the Tonganoxie Historical Socitey. The original barn was built in 1901, but burned down in 1928. Frank Fairchild, with his wife, Mattie, formerly of Ulster County, NY started the dairy with 40

To Tonganoxie calendar of events

Things to do Historic Churches near Tonganoxie, KS