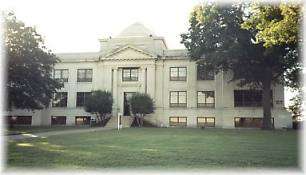 When Oklahoma was granted statehood, the first legislature established Eastern University Preparatory School, which opened on College Hill in Claremore in 1909. This school was to prepare Indian students for the University of Oklahoma. The only building on campus was Preparatory Hall. This domed structure was completed in 1911, and is listed on the National Register of Historic Places.

In 1919, the Oklahoma Legislature eliminated EUPS, and in its place established Oklahoma Military Academy, hailed as the "West Point of the Southwest".The first 40 students lived in tents during the fall and winter of 1919 - 1920 until Meyer Hall could be built. This building, also listed on the National Register of Historic Places, with the large columns in front was named for Maurice Meyer, the first Oklahoman killed in action in the First World War. On the second floor is the Oklahoma Military Academy Museum which is open to the general public. Currently, the museum is open the same hours as the campus offices but it is available for special tours or functions. In 1971, in response to the growing educational needs of a rapidly developing technological and industrial economy, OMA was replaced with Claremore Junior College which further evolved into the institution it is today.

Things to do Colleges near Claremore, OK