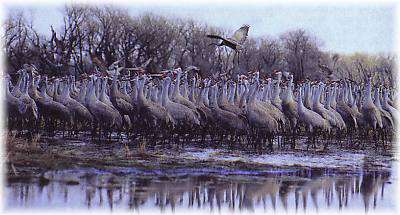 This 1,150 acre wildlife sanctuary is operated by the National Audubon Society to provide habitat for sandhill cranes, whooping cranes and other birds. In March and April, Rowe staff guides groups to four crane viewing blinds (enclosed wooden buildings), which accommodate 16 to 36