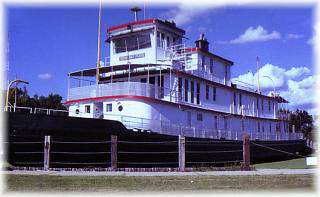 Board the M.V. Sergeant Floyd and begin a journey into the region's maritime history. Built in 1932 as an inspection boat by the U.S. Army Corps of Engineers, the Sergeant Floyd River Museum and Welcome Center chronicles the Missouri River's development as a major shipping route and the key to Sioux City's success in the early years of its founding. Discover exhibitions on the Lewis and Clark Expedition, the fur trade, Sioux City's evolution as a transportation hub and those rivercraft which still ply the waters of the Missouri River.

The Sergeant Floyd's location within Chris Larsen Park provides views of the Missouri River, picnic sites and access to the riverfront trails systems.