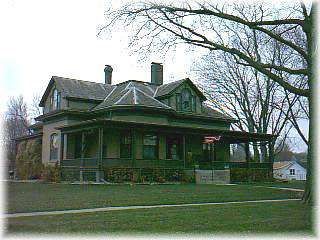 The Spielman House, listed on the National Register of Historic Places, has been owned by Delmar and Elaine Chamberlain since 1981 and exhibits both Queen Anne and NeoClassical
Revival detailing in its design. Built in 1906, the house boasts 14 rooms and several types of woodwork, including bird's eye maple, oak, beech wood, hard pine and red birch. Old bricks from Tekamah Grammar School, which once stood on the site, were used in construction of the home.

Pennsylvania native H. S. M. Spielman settled in Burt County in 1857, ten years before Nebraska achieved
statehood. Spielman was a successful, enterprising farmer for over fifty years before moving to this house in
Tekamah in 1906, after his retirement. He served as director and vice-president of the Farmer's Grain and
Livestock Association of Tekamah, director and treasurer of the Tekamah and Farmer's Telephone Company,
and vice-president of the Burt County State Bank.

Pelican Point is a 36 acre tract of land adjacent to the Missouri River. The park offers the only public boat ramp access to the river in the area. The minimum fee campground has 24 pads available for $5.00.

Things to do National Register near Tekamah, NE