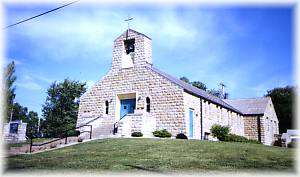 Local stone was used throughout the structure and is exposed both on the interior and exterior walls. Bob Truitt, with the help of Bert Handley and Stratton Noble, all of Omaga, quarried the rock southwest of town. They also cut and laid all of the masonry. Mr. Truitt was a stone mason all of this life and many of the stone buildings around Onaga were the work of his hands. This was his last work and truly a masterpiece.

The church's interior is ceilinged in wood from the exposed roof sheathing, supported by scissor trusses at five foot intervals, all finished to harmonize with the furnishings which are elm wood finished in light color. The windows may be called art glass. They convey the symbol of the Vine and the Branches. The church from the outside conveys a feeling of rugged strength and endurance. It is contemporary in design, but shows a mission influence in the bell tower, and a Gothic tendency in its front windows.

Things to do Historic Churches near Onaga, KS