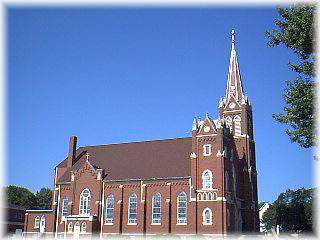 The first group of Czech settlers to come to the vicinity of Wahoo arrived in August of 1874. These settlers, who were of the Catholic faith, had to travel 15 to 20 miles in order to attend mass. For three years these settlers traveled to Plasi, Fremont or Abie to attend services. Finally in 1877, the Reverend F. Sulak arrived from Chicago to hold masses for the local Catholic congregation. Masses were held in the Court House or in the public schools. By July 1878, a church ad been completed in Wahoo, even though it was only 30' x 50'. Over the next 45 years, a new church was built on Linden Avenue and enlarged and finally in 1924 the present Gothic style building was dedicated. This church, measuring 126' by 54' was constructed at a cost of $100,000.