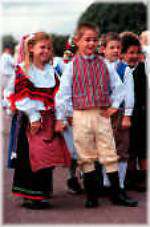 Swedish music filters down the streets and through the windows during the three day festival. The first Svensk Hyllningsfest was held in October 1941, to honor the Swedish pioneers who settled in the Smoky Valley in 1868-69.

Festival Royalty is selected from folks over the age of 65, of Swedish descent, who have contributed significantly to the community. Entertainment is non-stop during the three day period. Primarily Swedish music and folk dancing by both local and visiting performers. One much looked forward to part of the program is the Swedish folk dances and games by the grade school and middle school students. The Saturday night entertainment is something you won't want to miss.

A project of the Lindsborg Arts Council, Art in Public Places is a walking tour of the wide variety of displays in downtown Lindsborg. The multi media displays include paintings, tilework, sculpute and reliefs. Pick up a brochure at the Lindsborg CVB located at 104

The Pearson Woodcarving Studio, located is the oldest artist's studio in Lindsborg, preserves the memory of early pioneers. Son in law, Norman Malm, a prolific artist, continues the woodcarving tradition. A large collection of his pen and ink drawings and satire cartoons are shown as well. Norman'

The Raymer Society for the Arts presents Lester Raymer'

To Lindsborg calendar of events

Things to do near Lindsborg, KS