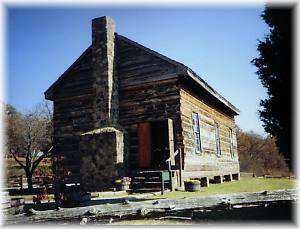 The reconstructed site of Tahlonteeskee has a council house and courthouse. There is also a log cabin that belonged to the Carlile-Foreman family, who were Old Settlers. North of this site are the remains of Tahlonteeskee located on private property. There are still signs of a foundation, an old well and a little cemetery almost erased from sight. Truly this area should be recorded as one of the most important historical sites in Oklahoma.

Tahlonteeskee was an uncle of Sequoyah and became the third chief of the Cherokees West, succeeding Takatoka. Tahlonteeskee and Doublehead, were signers of a treaty in 1805 that labeled them traitors. Tahlonteeskee departed for the West, Doublehead remained and was later slain by Major Ridge. Ridge later became a proponent of moving to the West. His group was called the Treaty Party, and he was killed after the forced removal to the West of the Eastern Cherokees. became chief. A treaty in 1817 gave them land between the Arkansas and White Rivers. Soon after this treaty, John Jolly and John Rogers came to the area.

These early Cherokees who migrated from Georgia, Tennessee, and Alabama were called Arkansas or, Cherokees West, to distinguish them from their tribesmen who remained in the East. Later they were referred to as "Old Settlers."

Sept. 11, 1824, while still in Arkansas, the Cherokees formally organized their government along democratic lines. Executive power was vested in a - first, second, and third chief. John Jolly was elected first chief, Black Coat was second chief, and Walter Webber was third chief. War with the Osages necessitated having three leaders. In May, 1828, they were forced to give up land in Arkansas for land what is now Oklahoma.

Jolly's hewed log home had massive stone fireplace chimneys and large comfortable rooms. Other buildings served as homes for the servants who operated a large plantation, well stocked with cattle. His home was always open to visitors of which he had many. It is reported that Jolly never slaughtered less than one beef a week throughout the year for his table.

Jolly's name was Oo-loo-te-ke, meaning, "He-Puts-the-Drum-Away." Wise, intelligent, and affectionately called, "beloved father," he was a half-blood who spoke no English. Mixed bloods were considered full bloods if they spoke only Cherokee.

The Capital was established east of Jolly's home. The council house, grounds, and home of the first chief made up the national capital called Tahlonteeskee to honor the late chieftain. The general council met here to make laws from 1828-39.

Tahlonteeskee continued as the Illinois District and a meeting place for Old Settlers. Meetings were held at Tahlonteeskee with the purpose of settling differences between the factions of the tribe. By 1846, there was unification of the three factions, and the Cherokee faction moved into what has been referred to as the "Golden Age," as they became prosperous through their industry and cooperation. The outbreak of the Civil War ended this, as "battle lines" were drawn along the old divisions of the nation.


Come visit us in Gore, Oklahoma

We currently do not have any events for Gore, Oklahoma in our database. If you know of events taking place, please add the event
.

Things to do Ethnic Heritage near Gore, OK