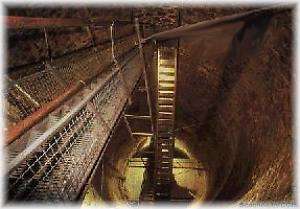 The Big Well is a marvel of pioneer engineering that was completed in 1888 as the towns original water supply. At 109 feet deep, this is a breathtaking sight to see. This new museum opened in May 2012 and once again allows visitors to descend a spiral staircase into the Big Well and view exhibits that feature Greensburg's history, the tornado, and our rebuilding as a sustainable community.

The story of the World's Largest Hand-Dug Well began in the 1880's when both the Santa Fe and Rock Island railroads were laying tracks across the plains of Kansas. A large supply of water was needed for the steam locomotives and for the people of the area. The only dependable source of water was from a well. In 1887, the city granted a franchise for a water works system, to cost approximately $45,000, a huge sum of money in those days. The Santa Fe terminated its track at the west Kiowa County line and removed eight years later.

Construction of the well was a masterpiece of engineering. Hired on a day to day basis for fifty cents to a dollar a day, crews of twelve to fifteen farmers, cowboys and other local men dug the well. Other crews quarried and hauled the native stone for the casing of the well. This stone was hauled in wagons from the Medicine River twelve miles south of Greensburg. Dirt from the well was hauled away by the wagons which had slatted beds. By opening the slats and dumping the dirt in low spots, streets and roads to the quarry were leveled.

For many years it was accepted that the stone casing was built on a circular wood platform and lowered inch by inch using jackscrews, and that the stonemasons worked at ground level.

Newspaper accounts of the well's construction describe exactly how it was dug, cribbed and cased. As the dirt was removed, it was cribbed with wood to prevent caving in. Every eight feet was braced from wall to wall with 2" x 12" planks. When the well was down to water, a ring was built, called a boot, constructed of heavy oak bridge timbers. The timbers were mortised and dovetailed together in such a way that no nails were used. When the boot was finished, the stone was started on it and the weight forced it through the water and sand till it rested on solid footing. As the masonry progressed upward, the cribbing braces were sawed off after the stone was laid up around them. Some of these ends have rotted away leaving holes in the wall, while others are still in place and are clearly visible.

People have been tossing money and other items into the Big Well since its beginning. In 1990, the town hired trained divers to clean the bottom of the well. A silver and onyx crucifix, shoes, coins, and even a rubber snake and frog were found. These items are on display in the gift shop. The money was deposited in a special fund to help maintain the well.

Visitors brave enough to walk down the 105 steps to the bottom will be impressed with this century-old feat. The lights installed under the water enable one to see all the way to the bottom.

Things to do Museums near Greensburg, KS