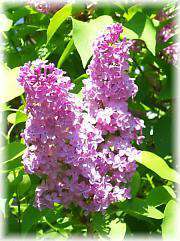 As you approach within a quarter mile of the old Peterson homestead on the Keith-Perkins county line, you are struck by one of the most intoxicating fragrances in the world - Lilac. The air is moist with the smell of Lilac. The once treeless, barren place under the care of Grandson Max Peterson and his wife Darlene, now supports one of the largest, private collections of Lilacs to be found anywhere. Max and Darlene have collected and are growing over eight hundred varieties.

There are over 3,000 named Lilac species and cultivars, not all of them readily available commercially. Only 26 of these are species, all of them native to Eastern Asia, Himalaya, Afghanistan, and Southern Europe. The remainder are man-made selections, or cultivars derived from open or controlled crosspollination, or spontaneous or induced mutants.

Started in 1969 as a family hobby, the Peterson collection comprises one of the largest privately held, variety-wise collections. Here can be found some of the rarest and most beautiful Lilacs to be found anywhere. When the Lilacs are in bloom, it attracts visitors and horticulturists from throughout the State and Country.

The gardens are open to the public and everyone is invited to stroll amongst the perfume laden blossoms during "Lilac Time." This usually occurs during the third week in May, but can occur anytime in May. Usually a call to Max will ascertain the proper time to visit.

Directions to the farm: From Ogallala go south on Hwy 61 about ten miles. A sign on the west side of the road will say, "Entering Perkins County." Go one more mile south, turn and go east five miles. Then turn north and go 3/4 of a mile.

Things to do Natural Attractions near Ogallala, NE