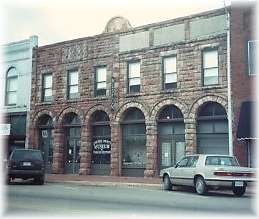 The oldest commercial buildings in Lincoln County, these sandstone "twin" buildings were built by pioneer merchant, A.E. Macho in 1897 and 1898. The earlier building was first constructed in 1896 and was demolished in the cyclone but rebuilt almost immediately. The early builder constructed three buildings at the turn of the century featuring these 15 foot high Roman arches of native stone.

The building is now the home of the Lincoln County Historical Society Museum of Pioneer History.

National Register of Historic Places Built by the WPA in 1942 of native limestone.

National Register of Historic Places This two-story white clapboard home was built in 1897 by H.F. Johnson as a simple territorial "four square" home. In 1905

Things to do Historic Buildings near Chandler, OK

Among the largest Masonic buildings in the world. ...

Built during the depression as part of President Franklin D. Roosevelt's WPA program, the construction of Okemah's WPA Pecan ...