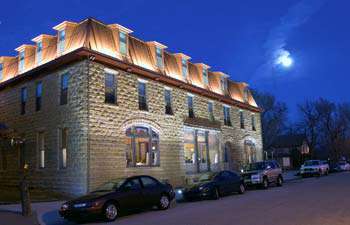 The native limestone structure was originally built in 1889 as the "Power Hotel." In 1902 a fire gutted the interior of the Hotel leaving the limestone walls. Mr. Samuel Anspaugh agreed to purchase the hotel site if the town would raise the money for interior construction. A fund drive netted $2,250.00 and the hotel was saved. The building was three stories high, with 27 rooms and a basement. It had hot and cold running water, steam heat, and was upgraded from kerosene to acetylene to finally electricity for lighting. A windmill in the back of the kitchen stood 60 feet high and supplied a water tank on the third floor of the hotel. The basement had a large coal bin, which once a year was filled with one railroad box car full of coal.

There were what was called sample rooms, where salesman would arrive by train and set up their wares from clothing, fabrics, furs, shoes, hardware, and tools upon trunks and displays.

By 1915, Mr. Anspaugh had the classiest Hotel in Kansas - the only one with modern conveniences. It was running an occupancy rating of 120% , with the only available space for late arrivals was the floor.

The Midland Hotel hit bottom in the 1980's, with only seasonal users for awhile. One noted "Valentine's Day Special" promotion invited a couple to spend the night for the rates on their wedding dates according to past registers of the hotel. Some couples were allowed a night for only 25 cents per night!

The hotel provided the setting for the 1970's movie, "Paper Moon".

Today, the Midland Hotel has been completely renovated where you will find a delightful blend of historic charm and modern convenience, including a restaurant and tavern -- a place welcoming weary travelers and comfort seekers for over 100 years.

Things to do Historic Hotels near Wilson, KS