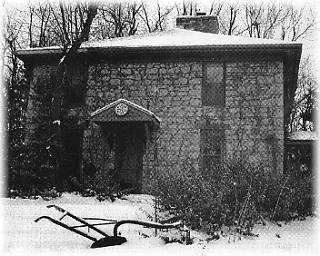 Many of the homes in Ashland carry a legacy of their own with some residences dating back over 100 years, and a majority of these are still lived in. One of these historic homes is over 135 years old and is still lived in without much visible change in its exterior appearance.

In 1864, Dennis Dean, one of the founders of Ashland, constructed a sandstone and grout house for his hired hand. Various owners of the house since then have made changes to the interior, but the imposing exterior walls stand today with few changes from the original construction. It is reported that a portion of the OxBow Trail, a branch of the Oregon Trail, runs through the front yard.

Layers of history have literally fallen out of the walls as the most recent occupants worked on remodeling the small farmhouse. Opened walls revealed stacks of old magazines used for insulation and blackened walls from previous fires evidently just plastered over. One walled in area opened up into an area previously closed off and big enough to form two new rooms and a hallway.

The original woodwork still covers some of the doorways, and a large set of original glass-paned French doors close off the master bedroom from the living room.

Things to do Historic Homes near Ashland, NE