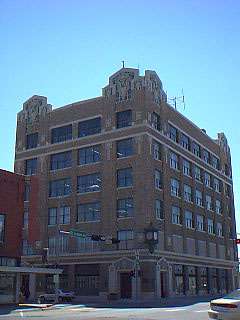 The Victory Building, named to commemorate America's victory in
World War I, is one of Nebraska's finest examples of early 20th Century industrial
architecture. It was constructed between 1917 and 1920 by harness maker William
Dutton as a factory and warehouse and financed in part by converting wartime
Victory Bonds into capital for the project. Hastings architect C.W. Way designed
the six-story structure in the Sullivan-esque style, using steel reinforced
concrete, concrete pan-joist floors and a brick and terra cotta facade. Other
distinctive characteristics include decorative terra cotta "VB"s (for
Victory Building) and "D"s (for Dutton Company) on the facade, the
ornate clock from the former German National Bank of Hastings, which was added
to the building in 1970, and the height of the structure, tallest in the Hastings
business district. The Dutton-Lainson Company, founded in 1886, has occupied
the building continuously since its completion. The Victory Building was named
to the National Register of Historic Places in 1987.