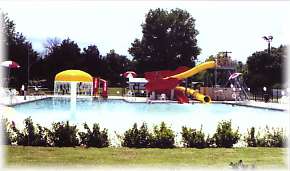 This is more than a new swimming pool the City of Wagoner has built for its residents and visitors. It's a whole water park full of fun for the entire family. Whether you're 2 or 22, 6 or 66, there's something at Wagoner's Water Park for everyone!

The park includes a 240,000 gallon pool with several areas of water fun. About 70 percent of the pool area is four feet deep or less so that you can enjoy the water at your leisure. It's zero-level entry, which means you can walk right into the pool without having to go down steps.

Those more serious about swimming will enjoy a diving board and two drop-in chutes that take you into the deep end of the pool. And, if you're ready for some real fun, climb the ladders to shoot into the pool via one of our two water slides! You can take the open chute for a winding ride down or the enclosed tube for a faster shot at hitting the water.

For the very youngest water enthusiast, we have built a special kiddie pool where children may wade in the water or get acquainted with Tommy the Turtle, who spews a fun stream of water into the air. Or they might want to stand under the raindrop umbrella or experiment with the water gates.

Things to do Fun Centers near Wagoner, OK

The Castle of Muskogee