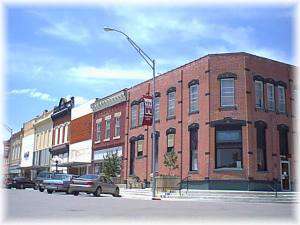 
The physical form of this six-block commercial district is an excellent example of the influence of transportation routes that were historically strong enough to pull development away from the traditional courthouse square. As a result, the commercial district does not entirely surround the square. This is a condition that is somewhat unusual in county seats with courthouse squares in Nebraska.

After a devasting fire in 1881, the downtown buildings were rebuilt of brick in Italianate Style. According to the State Historical Society, Pawnee City has good examples of major architectural styles popular during the Victorian Period.

The historic business district has new streets, sidewalks, and curbing, sewer lines and water lines. Along these blocks is also Victorian lighting, as it was in the early 1900s.

A self-guided, printed brochure is available at the Pawnee County's Tourist Information Center.

Have you seen a glow in southeastern Nebraska? Prairie hill sports Complex in Pawnee City sets of that glow each and every time those ball field lights are turned on for the ball games. The parking lot is generally full, and kids of all ages are seen with balls and bats in their hands.

We currently do not have any events for Pawnee City, Nebraska in our database. If you know of events taking place, please add the event
.

Things to do Tours near Pawnee City, NE