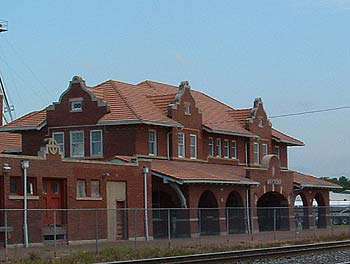 The Waynoka History Museum is located on the second floor of the Harvey House. As you exit the elevator, you can visit a room as it might have looked outfitted for it early inhabitant, a Harvey Girl. The second floor was the sleeping quarters for the Harvey Girls. The floor has been remodeled to accommodate the many exhibits featured in the museum and includes a conference room / video room with the museum's feature film Coast to Coast in 48 Hours, and others. From the south second floor window, one might see the oncoming disel engines of an east bound train headed for Chicago. As the mighty train comes into view, parts of the train are rolling through the Little Sahara State Park while the end of the train has just crossed the Cimmarron River. From the north second floor window, one might see the oncoming wast bound train headed for Los Angeles.

Exhibits at the Museum feature Waynoka's Harvey House, Railway's Ice Plant, and the Transcontinental Air Transport, a coast-to-coast air-rail venture of TAT and the Pennsylvania and Santa Fe Railroads. As you view the transportation exhibits you will be fascinated by the hustle and bustle of the once thriving link in the transportation system across America, a link broken when night flight was introduced to the aviation industry. A mural by John Holbird, one of Oklahoma's best railroad artists, depicts the sand dunes of Little Sahara State Park, Curtis Hill, the O'Connor Sand Pit, Mt. Heaman, Dog Creek, the Cimarron River, the Wild Cat[Wildcat] Hills, and Elm Park. The museum store sells beautiful prints of Holbird's Changing Crews at Waynoka. This painting captures the once common simultaneous beginning of one crew's day and the end of another's.

The museum has three German prisoner-of-war paintings which were found on the celotex between studs in an old POW barracks. During the renovation of the building, fourteen paintings were uncovered depicting famous German landmarks. The original location of the barracks before being moved to Waynoka was Alva, Oklahoma just twenty-six miles to the north of Waynoka. The prison camp was located on what is now the Woods County fairgrounds where some of the original prison camp structures can be seen, including the distinctively shaped water tower.


Come visit us in Waynoka, Oklahoma

To Waynoka calendar of events

Things to do Museums near Waynoka, OK