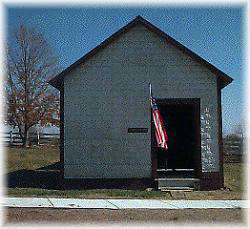 The building, complete with the original iron fixtures, was moved to Old Jefferson Town in 1977. A 300-piece collection of barbed wire, which belonged to the late John Woolfolk of McLouth, is on display.

"At last Winchester has a place in which disturbers of the peace may be thrown for safe keeping. A jail has been erected in the alley between the printing office and Evans' restaurant. We hope that none of our people will so far get out of the way that it will be necessary for them to occupy the place, but the way to keep out, is to be good."