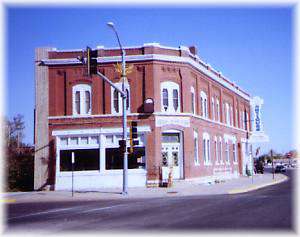 The Starr-Wolf Building constructed in 1894 and listed on the National Register of Historic Places, was a very active center for many years as a hotel, bank, and restaurant. The Weber Sample room and also the Sunflower Sample room were located on the tunnel level where salesmen would set up their wares to introduce new items and sell to the local merchants. The famous Sunflower Dining Room restaurant was added in the 1920's, to the back, or east, of the building.

A portion of the historic Ellinwood underground tunnels are still open under this building, however it is privately owned and not open for public tours.

It is still active today as an Antique Shop and Interior Design Studio.