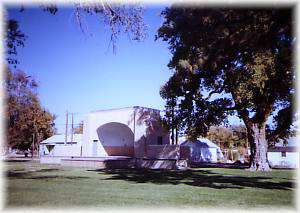 Fred Wolf bought the lots for a park on Mainstreet and in 1930 a bandshell was built by Young Construction Company of Hutchinson for under $4000. There was seating for 35 muscicians. Trees, shrubs, flowers, paths, and a gold fish pool were designed for the park. Soon seating for 250 was added in front of the bandshell.

Bill Junge(the same man who owned the barbershop and bath house in the Dick Building) headed a town band of 16 pieces. There was a dedication June 11, 1935 with 1000 people attending. There were numerous summer concerts, sometimes weekly at the bandshell. By 1939 an apron, 30 feet long and 10 feet wide, was added to accommodate all the musicians.

The Fred Wolf Memorial stands at the front of the park with a bronze by Professor Onorio Ruololo, head of the Leonardo de Vinci School of Art in New York City. The seats and gold fish pool and many of the plantings have been removed but efforts are underway to renovate Wolf Park. Much work has been done to refurbish the bandshell which is listed on the National Register of Historic Places.

Ellinwood's "After Harvest Festival" events take place in the park and bandshell annually the third weekend of July.

Come visit us in Ellinwood, Kansas

Things to do Amphitheaters near Ellinwood, KS