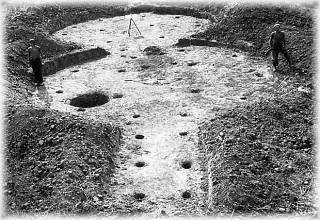 Sometime between A.D. 1600 and 1750 the ancestors of the Skidi Pawnee occupied this immense village on a prominent terrace overlooking Beaver Creek and the Loup River near present-day Genoa. Archeological research at the site included excavation of ten earthlodge ruins. Over fifty human skeletons were discovered on the floor of one lodge, apparently the victims of a massacre. - Listed on the National Register of Historic Places