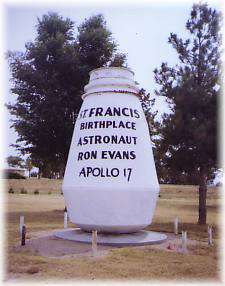 St. Francis, Kansas is the birthplace and boyhood home of Apollo astronaut, Ron Evans, who was aboard the Apollo 17 in its sixth and final lunar expedition of the Apollo series in 1972.

While aboard the expedition, Ron Evans made the longest space walk of the time at 44 minutes in space in which he recovered camera data from the exterior cameras. This maneuver took three round-trips to complete.

Ron Evans died in 1990 in Arizona of an apparent heart attack.

On display in the Cheyenne County Museum next door is an essay signed by Ronnie Evans that pictures his boyhood "aspirations" when he would be grown up: