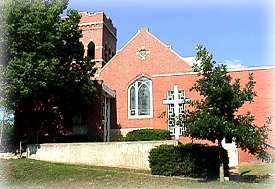 Hopewell Church was originally located southwest of Beloit. Parts of the church building are 111 years old. Founded in 1876 a...