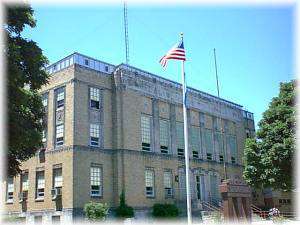 After Governor Charles N. Haskell's declaration on May 6, 1910, that Stilwell was the permanent county seat of Adair County, the county records were moved from Westville to Stilwell for the last time.

A two-story frame school building, erected in 1902, was used until 1908 when a new brick building was built. Another courthouse was built in 1920 patterned after the Sequoyah County Courthouse using native stone. This building was used until it was questionably burned on December 30, 1929. Again county officials had to occupy rented quarters at $100.00 per month.

The current courthouse was completed in 1931, and stands on the same place as the previous stone building. The courthouse is constructed of granite, steel, and concrete and its cornice is faced with molded figures of Native American figureheads across the entire front.

In 1992, a veteran's memorial was dedicated on the front lawn of the courthouse.