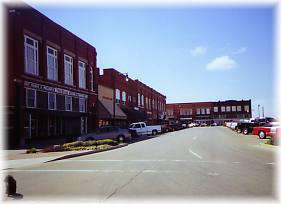 The Calloway Building was built in 1912 and featured an Opera House on the second floor that was lighted by a skylight and was served by Cordell's first passenger elevator.

Come visit us in Cordell, Oklahoma

. L. Hull, long-time president of the First National Bank, was instrumental in the construction of both the old First National Bank Building in 1909-1910 and the Carnegie Library in 1911. He is seen above in the right corner of the 1910 photo of the bank'

This photo shows the 1911-1912 Florence Hospital. The hospital, named for the wife of Cordell doctor A. H. Bungardt, was housed on the second floor of this building until the Cordell Memorial Hospital was built in 1957. Photos of the interior include one of the door to the fathers'

To Cordell calendar of events

Things to do Historic Buildings near Cordell, OK