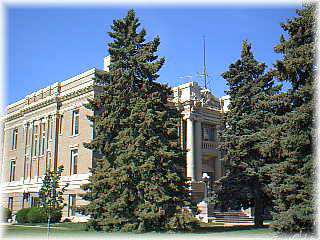 The Clay County Courthouse was built in 1918, replacing a brick structure that was built in 1881. The courthouse stands in the center square of downtown Clay Center surrounded by 30 retail businesses and services. Inside you can see the old vault door decortated with an artistic design, a common tradition of the time. 1878. There had been a great deal of controversy
over the location of the county seat. While Harvard and
Sutton, both in the northern part of the county, argued the
matter, the citizens in the remainder of the county took steps
to provide what they felt was "the perfect location." In an
election held in 1879, the voters favored the proposition
that the seat of government be moved to the middle of the
16-township county and be given the name "Clay Center."
The election was, of course, contested. But as soon as a
one-story, frame building was completed, the county
records were whisked out of the building in Sutton in the dead-of-night, and brought to the official county seat by horse and
wagon. Thus ended another colorful Nebraska county seat saga. Things to do Historic Courthouses near Clay Center, NE